Cool and green roofs: are they that good for our over-heated cities? 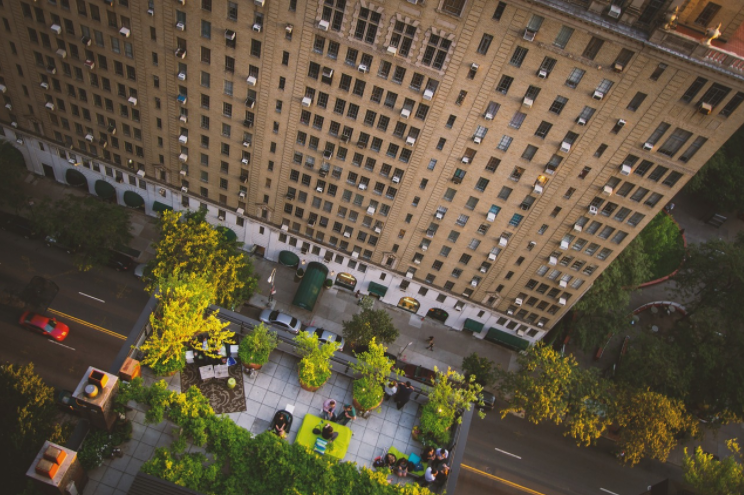 If you have ever spent a day in any major city, you don’t need me to tell you how hot it can get in the concrete jungle. During daytime, cities absorb solar energy whose heat is radiated back to the atmosphere at night. The result is sweaty, over-heated cities that have higher temperatures than its surrounding areas – basically what many have come to know as urban heat islands.

You’ve surely noticed that phenomenon by now and probably dismissed it as just another issue of living in a big city. Unfortunately, that heat is a threat for public health and for the notion of sustainability in a bigger scale. Over-heated cities increase death rates and the demand for cooling energy while also being extremely unpleasant to live in. In short, they are a problem and one that we need to address right now – especially since more and more people are moving into those very same cities.

Luckily, there are some people already working on the issue – and some of they are suggesting we should help those over-heated cities with green and cool roofs as our allies.

Think about it. Roofs account for almost 30 percent of the total area of any city and they are mostly built with asphalt, a material known for its performance but also for its heat absorption. That’s why many experts think roofs are the key to tackle the problem. With enough reflective and green roofs, the amount of heat absorbed by our homes should be reduced dramatically, which would also translate in less energy use, lower emissions and more sustainable cities altogether.

Additionally, roofs usually are remodeled more often than whole buildings, so the change could be quick and virtually effortless. Well, at least in theory. Now, what happens with green and cool roofs in practice?

The University of Notre Dame’s Environmental Change Initiative recently conducted a study on green and cool roofs and their effects in Chicago. They used green roofs covered with plants and vegetation, and cool roofs, surfaced with reflective materials, to test the impact on the city’s temperatures in many areas.

The results are very interesting. While green and cool roofs actually help in mitigating the urban heat island effects on a local level, they weren’t as uniform as expected. Besides, there were some unforeseen regional effects that acted as factors in how the overall city performed. In other words, downtown Chicago saw a major drop in its temperatures in the range of 7-8 degrees Celsius while the metropolitan area ‘only’ saw a cut of about 2-3 degrees. The takeaway is obvious – green and cool roofs work better on densely populated areas.

Additionally, the difference between the temperature in Chicago and its surrounding areas was less than without the energy-efficient roofs. That impacted the strength of breezes and the overall quality of the air above the city. Though that might seem like minor things, they should be looked into, since they directly affect the temperatures of our cities as well.

So, are there benefits in green and cool roofs?

A quick look into these types of roofs might tempt you to say that green and cool roofs are extremely beneficial. Implementing green roofs on a large scale would bring more plants and green spaces to our cities, improving air quality and increasing local humidity. Cool roofs, on the other hand, are energy-efficient and don’t require watering while having a similar impact on temperature as green roofs.

Of course, we should take into account the other, more ‘invisible’ effects that could arise from implementing green and cool roofs on a larger scale. After all, cities are vibrant ‘organisms’ that depend on many factors to work and perform. City planners should be informed before passing regulations to implement these efforts.

But what YOU should learn from all this? In a domestic scale, green and cool roofs are amazing opportunities to save energy and money. They aren’t major investments and their benefits exceed their negative impact by far. Perhaps you should think about it next time you’re considering a remodel. A green or cool roof can make a true difference on how you live and you’ll be helping our over-heated cities with a sustainable effort. It might not be a huge deal but it’s a beginning!

New Year, New Logo, Enhanced Treeium Inc.
Treeium, Inc. is proud to announce the launch of our new brand identity and logo as part of the organization’s ongoing e...
Patio Pavers: Design Ideas & Inspiration
Patio pavers are a timeless trend that enhance the aesthetic of your residential landscaping and increases the value of...
Awards and Recognitions
Our greatest achievements come from hard work, attention to detail, and high-quality service, the sum of which is greate...
Spring Into the New Year With Treeium’s Latest and Greatest Outdoor Living Division
Treeium Announces Outdoor Living Division The ever expanding Treeium Inc. is proud to announce its newest product offeri...
Capitalize on your future by investing your tax return - Tax Day 2019
April 15, 2019 is tax day and while many retailers are offering tax free purchases on everyday items, we at Treeium like...
Treeium Feels The Love In The Air “People Love Us On Yelp” Award Received
For an unprecedented fifth year in a row Treeium, Inc. is a proud and distinguished recipient of the “People Love Us on...