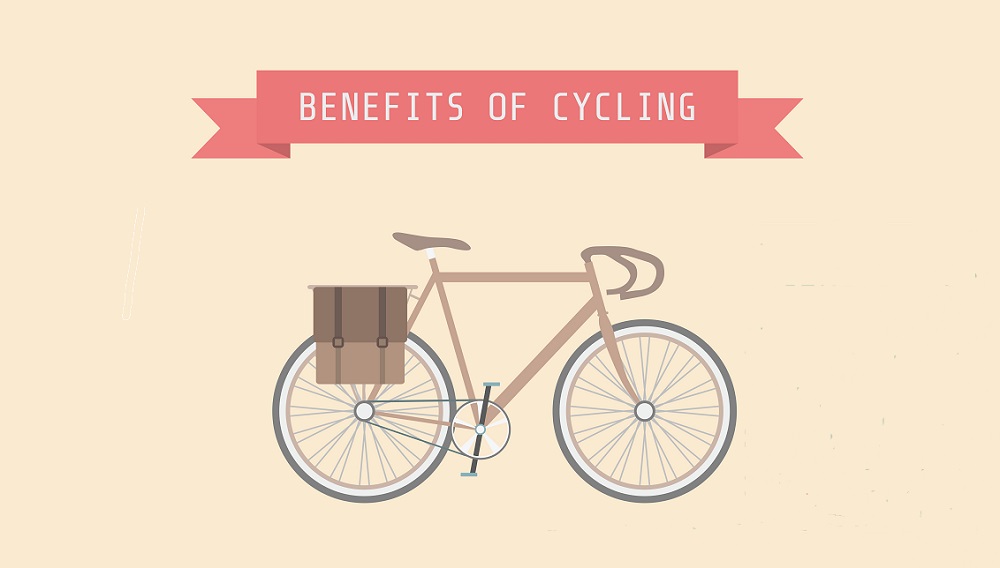 If you’re really serious about turning to a healthy living, then you should be considering the possibility of finally starting to use a bike. Using one will certainly have an impact on your daily routine but, in the end, you’ll feel that it will be a change for better. Not just because you’ll be having a daily dose of free exercise, but because you’ll be embracing a green lifestyle for which the environment will be grateful for.

Not feeling convinced? Here are 15 benefits of using a bike.

Professionals have established that at least 30 daily minutes of moderate physical activity it’s enough to keep your health in top form. Riding a bike to your work, college or simply for a spin in your neighborhood can help you cover that amount of exercise, even in the busiest of days. Besides, if you use it as your means of transportation, you’ll practically be forced to a daily physical activity.

Biking has long been proven to be a great way to relieve stress. That’s because a combination of factors. For one, cycling forces a regulation in your breathing and makes you breathe deeper to expel CO2, both methods used to relieve stress in clinical techniques. Second, biking will surely let you avoid traffic jams – one of the most stressful situations we have to deal every day. Finally, you can use your bike as a way to meditate. The repetitive pedaling can take your mind off your worries in the same way the words are used in classical meditation.

3 – A bicycle is more affordable than a car

Saying that you can purchase a bike with way less money you’d need to purchase a car is as obvious as anything can possible get. Yet, it’s important to remember that the best of bikes (one that will outlast most cars) can be bought for the price of a single car payment. And we don’t even begin considering the maintenance costs! – which, by the way, are overwhelmingly in favor of the bike in a 1 to 100 proportion.

4 – Biking will save you hundreds in transportation

Look, we know that sometimes public transportation is unavoidable, especially when the distances are considerable. Yet, there are many other times in which you can certainly make the run with a bike ride. Thinks about the times you’ve traveled a few blocks in a cab or bus and how much would you have saved if you’ve chosen the bike instead. Having a bicycle as an alternative, then, is always a smart idea.

5 – Bikes are a great alternative transport

On a related note, bikes can save you from having to get a second car. It’s possible that your lifestyle doesn’t allow you to adopt the bike as a primary transportation. That doesn’t mean you can’t use it as a second vehicle and save thousands. Instead of taking the car for your errands or for commuting, go biking! Besides, you’ll always have your car when you need it but you won’t have to maintain two cars with all the costs that implies.

You surely already know that bikes are an amazing way to reduce the pollution caused by transport. What you probably don’t realize is that using it for 10 km runs per day saves about 1500 kg of greenhouse emissions a year. Besides, you’ll also be contributing to reductions in greenhouse gas emissions since you won’t be trapped in traffic jams, one of the main causes of urban pollution.

7 – Bikes have a small manufacturing footprint

All manufactured products in the world have some sort of environmental impact. Among them, there are some that take way less materials, energy and shipping, which make them ideal for anyone concerned about the environment. You’ll be glad to learn that bikes are among the products that have this tiny manufacturing footprint, certainly smaller than that of a car or a motorcycle.

The fact that bikes don’t use gasoline as fuel isn’t great just because you won’t cause pollution by using them. It’s also amazing they don’t use oil byproducts because it’s about time that we start taking steps for cleaner alternatives in all the products we use. Bike usage can be contagious, so if you start doing it you’ll be supporting a healthy bike culture that inspire other people to look for cleaner transports.

If you don’t own a bike, your travel alternatives are reduced to public transportation, walking or hopes for buying a car in the future. Well, we already discussed the cost of purchasing and maintaining a bike, something you should consider seriously. Not only bikes are affordable for groups of population with low rates of car ownership, they can provide them with the ability to travel within the cities they live in for free. Thus, you won’t have to wait for the bus or walk for hundreds of blocks to get where you’re going to.

This might seem rather idealistic but it ends up being a reality more times than you imagine. Whenever a community starts adopting bikes as a means of transportation, the local government is forced to transform certain city spaces to accommodate them. The result? An increased network of paths and improved road crossings from which not only bikers will benefit but pedestrians and people with disabilities as well.

11 – Biking can become a social activity

Group of bikers going cycling around town is becoming a more common activity lately. That’s because biking with other people can be a funny option for social interaction. Thus, if you go out with your bike, chances are you’ll meet new people and even make new friends who love to pedal around town and be outdoors. Besides, this enhances the sense of community in your neighborhood.

12 – Safer environments in your community

Imagine for a moment that all your neighbors start using bikes. Your street soon would be transformed: less cars driving by, less noise and, more importantly, a safer environment for your children to play around. If people started using bikes more and more, your whole neighborhood and the ones next to them would turn into more pleasant places to live in.

Using a 20-pound bike can certainly be gentler on the pavement than a regular two-ton car. In other words, the more bikes we use in our roads, the less potholes the city has to patch and roads to resurface. In the end, using a bike saves you a considerable amount of money in an indirect manner – if the city doesn’t have to work so much on the roads, you’ll see that reflected on the taxes you pay.

14 – Using them increases the residential space

Another way in which bikes impact the life in the city is that they need less infrastructure (roads, parking, service stations and even car factories). This extra space can translate into more open spaces in urban areas which ultimately can be used to develop greener places like parks. Indirectly, bike use helps reducing the amount of cement in the city.

15 – Businesses benefit from having bikers among their staffs

Recent studies have proven that bicycle commuters don’t only enjoy a greater health but also are more productive and require less time off when working. That’s why big companies are encouraging their workers to start adopting bikes to commute – they already know that healthy workers are better, more focused workers. So, if you have a business, encourage your employees to do so. If you are an employee, share the idea with your boss. It’s a win-win situation for everyone!

That’s a pretty long list, don’t you think? But the best you can do is stop reading about the benefits of biking and, you know, ride a bike yourself to feel them by yourself. Once you’ve done that, you’ll never want to leave the bike again!